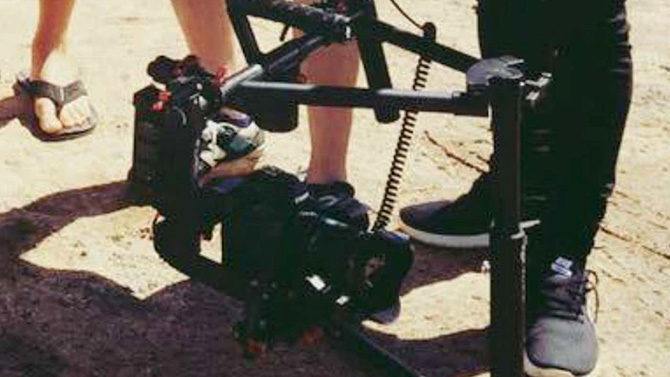 If windsurfer, Levi Siver’s Instagram feed is to be believed, we appear to have the first shot of the impending Canon 5D Mark IV.

During what EOSHD describe as a “Red Bull sponsored surf shoot”, Levi appears to have posted a photograph of the crew to his Instagram feed, with a caption that mentions “the new unreleased Canon camera”.

It’s much too dark and small in the frame to be able to see any kind of model numbers, but from the caption and comments, and that only “new unreleased Canon camera” anybody’s really talking about is the 5D Mark IV, Levi claims that it is indeed what it is. 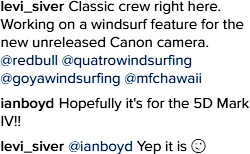 Canon Rumors are remaining, as they often do, sceptical as to whether or not this actually is the new 5D Mark IV, as it’s impossible to really tell from this photo, but one member on their forums pointed out that the hood of the attached lens doesn’t seem to match any current models.

This could be the soon-to-be-announced EF 16-35mm f/2.8L III, which has the new EW-88D hood, and would certainly lend some credit to the suggestion that the camera might also be something as yet unreleased.

Could this be the first unofficial photo of the 5D Mark IV? Or are we simply being trolled?  Let us know your thoughts in the comments.

« THANK YOU! + best image manipulation store sale EVER
Why Envy Any Other Photographer? »