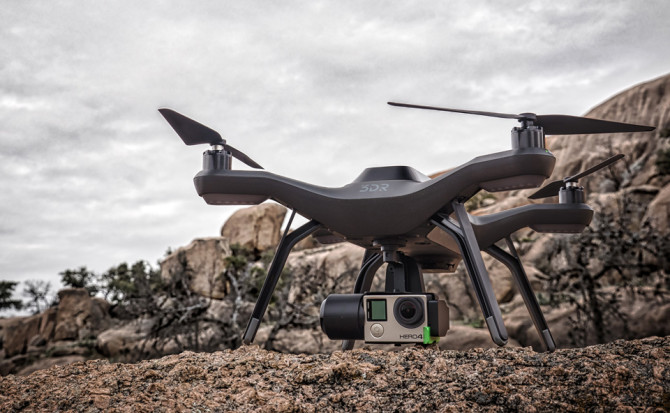 Just days after industry leader DJI announced the 4K Phantom 3 drone, 3D Robotics presented its own advancements with the Solo – a ready-to-fly drone made specifically for the GoPro.

The ‘smart’ drone uses two computers in order to allow unique features and have the drone fly autonomously according to a predetermined path or pattern. This allows you to focus on operating the camera rather than have to worry about flying the drone.

The Solo will soon hit the stores and is expected to be available in 2,000 physical locations.

Thanks to the twin 1GHz computers found in the Solo, one in the drone and one in the controller, the drone is able to offer smart shots.

These flight modes are easily set-up from your mobile screen and make getting the shot a piece of cake.

These flight modes include Selfie, Cable Cam, Orbit and Follow.

In Selfie mode you will be positioned in the center of the frame as the camera pulls out and Cable Cam will take the drone from point A to point B in pre-determined line.

The Orbit and Follow modes are pretty straightforward – Orbit circles the object of your choice for a “wrap-around” shot and the last mode will follow you around. This is great as it will allow you to record yourself hands-free without have another pilot around.

Obviously there is also a regular Fly mode for those who actually want to fly drone.

Despite the automatic features, the Solo will still be customizable and hackable, allowing the addition of new features through the accessory bay.

Thanks to 3D Robotics’ collaboration with GoPro, the drone’s mobile app is capable of accessing the action camera’s settings and controlling it mid-flight. Having full access to the settings means you will be able to change whatever you like, as if you have the camera in your hands.

This is a huge advantage as you no longer need to end a flight if you want to switch from video to stills, you can start/stop recording mid-air and you can change your filming angle without bringing the drone back down. These are just a few examples, of course.

The GoPro’s ability to stream live 720p directly to your phone from over half a mile away means you can actually see what you’re recording, so there’s no guess work involved.

The Solo’s controller was designed to be easy to use and it seems to be very intuitive, making this an even more inviting option for first timers. There’s even a flight simulator built in to the app that will help you learn how to fly. 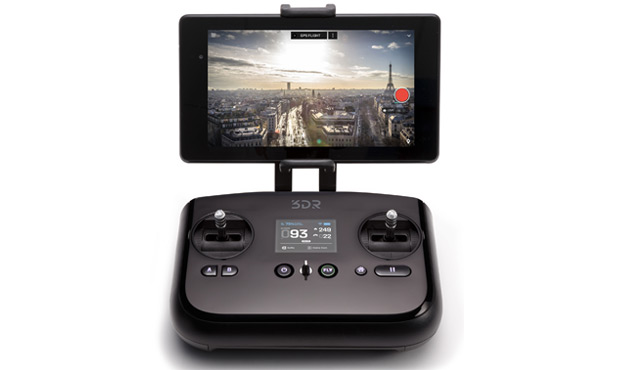 The Solo will be available in May for $1,000 and you will have to part from another $400 if you want the GoPro gimbal.

This will be an important factor for potential buyers who do not own a GoPro, but according to 3DR’s SVP of Sales & Marketing, Colin Guinn, 90% of their customers already the popular action camera. “That means we can put more of that cost, and more of that technology into the Solo”, he adds.

[via Engadget and 3D Robotics]