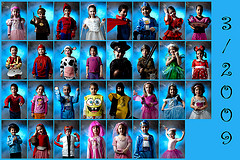 A few weeks back I was asked by my daughter’s kindergarten teacher to come and take everyone’s portraits of a kindergarten custom party.

Of course I said yes. Then I hit me. I am scared sick from staying home alone with my daughter and one of her friends, how the heck am I going to manage 35 kids running around?

OK, I’ll talk about kids a bit later. Before this let’s talk setup.

My plan was to use two speedlights. The first speedlight will go on a stand with an umbrella. I thought that using one speedlight with an umbrella will create a bit of drama on the portraits. While this is not the trivial choice I thought that setting up for some drama will provide something a bit different from all the evenly lit kids is a custom shot I have from when I was a kid. So yes – the first flash goes ina  classic 45/45 postion.

The other strobe was planned to sit somewhere in the room, gelled and shoot towards the wall behind the kids. To make it more interesting, I planned to place an object (a plant, a paper cut, anything really) between the flash and the wall. Well, plans are one thing and dealing with 31 kids is another.

When I discussed it with the kindergarten teacher, we planned to have about a quarter of the space for me, and have the kids play in the other 75% of the kindergarten. Well, as kids usually are – all over the place – I was left with only 2 meters by 2 meters to work with. There goes my background plan.

Fortunately, I did carry a backup. A collapsible gray backdrop. This is a great accessory I really like. It folds flat to a disk that does not take a lot of space. Opened, it is a huge rectangular backdrop. I use a gray one, since I usually shoot color to it using a gelled flash.

So, plan B – I took out the collapsible and placed the second strobe on a light stand. Gelled it and gridded it.  Putting a gridspot on made sure the color will not spill over on the kids. For setting the flash power – I wanted to get a smoky effect to add to the drama, so I set the flash to burn the backdrop just a bit.

I also made sure that no stray kid will knock my light stand over. I am pretty sure that the light stand and flash will take it. Not too sure about the kid though. 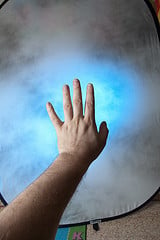 Now I had my setup. I shot my hand (a nice trick I learned from the Strobist DVDs basketball session – a must watch for any lighting enthusiast) Till I had my exposure right, and I was good to go. Almost. I saw that I had really bad shadow on the right side. Enter white table cloth, along with a knocked over table to hang it on. Really I had to give it to the teacher for letting me turn a table sideways without having a cow. Shot my hand again. I am good.

Stage left, come a swirl of kids. Now did I say swirl. It was more like a hurricane. Most of the kids never saw a Strobist setup before and were utterly intrigued. And the costumes got their adrenaline levels to pass the red mark. Thank heavens and the teacher for bringing some order to this ho-my-god-how-can-anyone-handle-this chaos. The teacher had a list and blocked the crowds with her body called each kid in turn. Each got their minute of glory. Some were giving themselves away to the camera, some were shy and needed some help to open up. You can watch the complete set below.

A word about business – It so happened that some kids did not have there portrait taken. Some were sick and did not come to that day, some arrived at the garden after I left and two of the kids missed the session even though they were present.

Option 1 – Just ignore it. Get the pictures to the happy parents and “ignore” the fact that some kids were missing.

Option 3 – Invite all those who did not have their picture taken to a “redo session” where I will take their picture and add to the rest of the images.

This was not a hard choice. I took option 3. Now let’s see the trade off here. I will have to put in some of my time to make those pictures, print them and deliver to the kids.

On the plus side, I am making sure that all the kids got their pictures taken. Making sure all the parents are happy and the all the kids have some nice memory from this event. This was a no money gig, but I would have done just the same if it was a paid job. The motivation for me is really simple – making the customer happy will result with good karma and good business.

Use a prism, gels, and camera movement for more dramatic portraits with flash