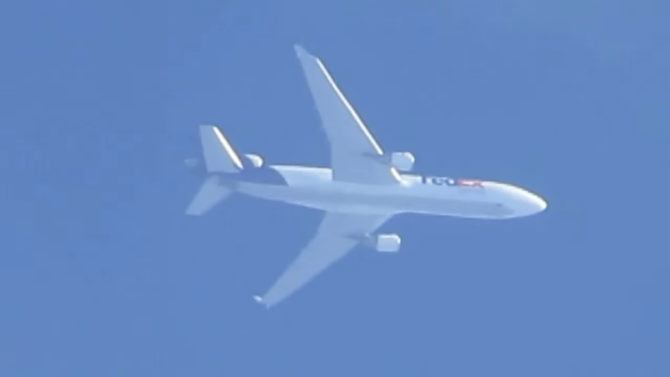 Even without the assistance of the 4x digital zoom, the 50x optical zoom of the Canon PowerShot SX50 HS was pretty impressive when it was released. But what does a combined 200x zoom actually look like? Well, it means you can read the writing on planes flying overhead. Planes that you can’t even see when the lens is set to its widest focal length.

The 50x optical zoom alone is the focal length equivalent of 24-1,200mm on a full frame body. The 4x digital zoom brings that up to 4,800mm equivalent, but you’re still probably better off sticking with the optical and scaling in post if you need to. That being said, it’s still pretty impressive. That it can make out anything at all at that distance is pretty ridiculous.

It’s also a testament to the camera’s built in image stabilisation. It certainly wouldn’t be easy to track a moving plane at this distance and field of view without it.

For those who think this may be faked, there are plenty of other videos on YouTube showing off the SX50’s capabilities.

It’s since been replaced in Canon’s lineup by the PowerShot SX60 HS, which has seen he optical zoom bumped to  65x (21-1,365mm) before the 4x digital kicks in (bringing it to 260x, a 5,460mm equivalent). I’ve never been a huge fan of digital zoom, but this sample shot on the SX60 is also pretty impressive.

The digital zoom of the Canons does give it a little extra edge, but given that digital zoom is generally pretty crappy, the Nikon P900‘s 83x optical zoom (24-2,000mm equivalent) is still king.

Ok, so cameras like these might not give you the quality you can get with a DSLR, but they are convenient. You can go the DSLR route if you want to. But the cost and weight limitations would definitely be a bit of a disadvantage.

I do wonder what most people would actually use this kind of zoom for regularly. Beyond the initial tests of zooming into the moon and planes, I mean. Perhaps bird watching? It’s a much smaller package than a spotting scope with a DSLR. But what else?

Do you have a “superzoom” camera? What do you use it for? Is it something you use regularly? Or is this kind of range mostly just a gimmick? Let us know what you think in the comments.

This Crazy Rig Is Perfect For Shooting Airplanes