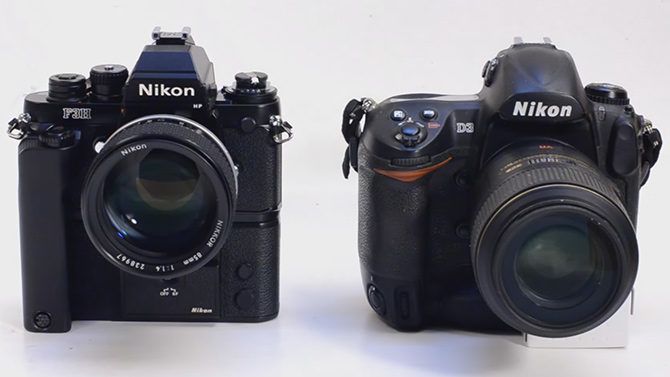 Twenty years ago, Nikon released a very special camera; The Nikon F3H (“H” for “High Speed”).  Designed specifically for super fast burst shooting, it keeps up well with many of today’s modern DSLRs.

Capable of shooting at 13fps, this rare modification based off the Nikon F3 and MD-4 motordrive manages to stand up against any of the latest and greatest modern DSLRs.

In this video, the F3H’s 13fps is put against the measly 11fps crop mode of the more recent Nikon D3.

Extremely rare, with only around 500 units rumoured to have been made, the Nikon F3H was designed for use by press reporters covering the 1998 Winter Olympics, in Nagano, Japan.

An enhanced version of the Nikon MD-4 motordrive, the MD-4H, was created especially for the F3H, which allowed it to get the ridiculously high frame rate, although the F3H would also work with the standard MD-4.

13fps did have its drawbacks with film, and it could see you blow through a 36 exposure roll of film in less than three seconds.  While the original MD-4 motordrive allowed other Nikon SLRs to shoot rolls of up to 250 exposures, unfortunately the modified MD-4H could not.

So, while we’re only starting to see these big numbers from DSLRs now, they have existed in the past with film.  Even Nikon’s flagship F6 35mm SLR, which is still available today, is capable of shooting a respectable 8fps, although Nikon did release the S3M Rangefinder in 1960, capable of up to 9fps.

The mechanics of it have not been the issue, simply the amount of data that has to be shifted once you convert this over to a digital imaging camera.  Advancements in electronics and computing is what has allowed DSLRs to get to where they currently reside.

Now that storage cards have gotten to the speed they have, and that memory’s dropped so low in price while increasing in capacity that we can have insanely large buffers, and the pipelines through which data can be sent have been expanding rapidly, such framerates that have been with film for a long time are now finally coming to digital, and even being surpassed.

Canon, however, do seem to be leading the way at the moment, blazing this particular trail with 14fps (16fps in live view mode) in the 1DX Mark II.

With DSLRs capable of framerates like these, and with some able to shoot 4K footage at up to 60fps, it doesn’t look like things will be slowing down any time soon.

In fact, it’s likely quite the opposite will happen.

Are you driven by burst lust?  I can’t see many of us shooting this way all the time, but such speeds do come in very handy for 3-5 shot bursts (assuming you can lift your finger off the shutter fast enough) in an attempt to catch a specific moment.

The Reflex is the first new 35mm manual SLR in 25 years, and it’s modular